China Cracks On With Its Second Carrier 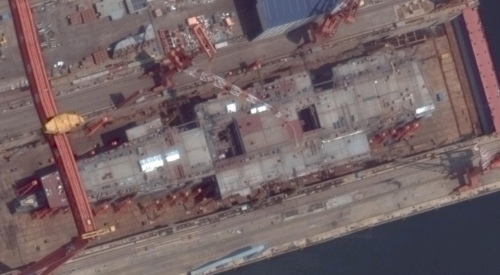 THE CONSTRUCTION OF the hull of China’s second aircraft carrier has been completed, state media reports, and the flight deck is now being installed.

Once that is done, probably by the first or second quarter of next year, the vessel will be floated, and its fitting out will start. Sea trials will likely not begin until 2018 or 2019, so the carrier will not be commissioned into active service until the 2020s.

The picture above was taken in Dalian earlier this year, so the flight deck will by now be looking more complete, though there is still work to be done below deck. Our man with the telephoto lens says the island (conning tower) was being installed by late September.

The vessel, known as 17 (US Navy convention would call it CV-17, but the PLA-N uses just a number), is similar in many respects to China’s first carrier, which carried the number 16 before being rechristened as the Liaoning. Whereas the Liaoning was a refit of the Varig, a surplus Soviet-era Admiral Kuznetsov class carrier bought from Ukraine where it was built, 17 is an indigenous version and will carry the designation of a Type 001A class carrier.

It is about the same size as the Liaoning, unsurprisingly as it is being built in the same Dalian dry dock as its predecessor used, but lighter, displacing about 50,000 tonnes. As can be seen in the photograph, it will have a ‘ski ramp’ launch system at the bow.

It also looks to have more space for aircraft than the Liaoning and less for secondary weapons. 17  will still be capable of carrying less than 50 aircraft, including helicopters, but a few more than the Liaoning. As well as the J-15 fighters and helicopters that the Liaoning has, 17 will probably carry an anti-submarine and early warning patrol aircraft.

Chinese military strategists have indicated that China plans a set of three Type 001A carriers — one to be operational, one in port and one in maintenance.

They will very much be the PLA-Navy’s training wheels. Though operational warships, as a carrier battle fleet, they are far short of the blue-water force China has aspirations for its Navy to be. Nineteen, 20 and 21 — Type 002 class carriers — will be much closer to that. This Bystander will be looking for keels to be laid in 2017, probably in Shanghai yards, but they will not be operational on the high seas for at least a decade. Until then, Beijing will have a carrier force whose primary purpose will be to project force in the South China Sea.

That force will be constrained. For one, the J-15s flying from it are a converted rather than a customised marine fighter, and one that has limited strike capacities. Battle-effective carrier fleets need a range of patrol and other aircraft capable of waging electronic warfare. That 17 will likely carry one or two of them is notable.

Furthermore, ski ramp launches restrict a carrier’s fleet to jets. Transporters needed for resupplying carriers far out at sea might be able to land on them, but cannot take off again. Nor can turbo-prop patrol aircraft operate from them.

The next set of carriers will have either the more powerful catapult launch systems standard on US and Russian carriers or may skip a generation and go to electromagnetic systems as are being developed for the US Navy’s most advanced carrier.

That might prove a step too far too fast for China’s naval architects and designers. They have climbed a steep learning curve with refitting the Liaoning (despite the Varig coming, reportedly, with eight lorry-loads of technical documents). Building its successor from scratch will be proving equally challenging, though it has been achieved in double-quick time by carrier-building standards.

In addition, the submarine force has been the navy’s development priority over the carrier fleet, and thus it got the pick of the available design and development talent — the often forgotten constraint on all navies.

2 responses to “China Cracks On With Its Second Carrier”