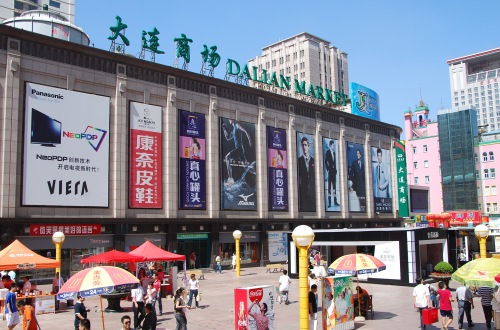 Third-quarter GDP growth came in at 6.9%, its slowest quarterly growth since the immediate aftermath of the 2008 global financial crisis.

The outcome was one tenth of a percentage point faster than forecast by private economists and in line with the government’s official target of “about 7%,” which Prime Minister Li Keqiang has fudged even more by saying slower growth is acceptable provided sufficient new jobs were being created — the subtext being that growth won’t be allowed to slow to the point where social stability is at risk.

To that end a series of old-school pump-priming measures have been taken — interest rate cuts (five in the past year), lowered bank reserve ratios (on three occasions), aid for exporters and speeded-up approvals for large infrastructure investment. However, as we have noted many times, these hold back the switch away from the economy being led by (debt-financed) infrastructure investment and exports to being led by domestic consumption.

Nonetheless that ‘rebalancing’ is happening, albeit more slowly than the leadership would like, and China needs for reasons that we shall return to below.

For all the attention paid around the world to the economic indicators of industrial output and merchandise trade, the tertiary sector of the economy — i.e. services — is growing faster than the secondary — i.e. manufacturing, mining and construction. In the third quarter, services expanded by 8.4% compared to secondary industry’s 6%.

That all said, stronger fiscal spending and more measures to promote rapid credit growth is likely in coming months to keep the pump primed and the growth slowdown on a measured glide path. At the same time, the leadership needs to keep pushing through the deeper structural reforms that rebalancing demands and which China is running out of time to put in place if the country is to vault from the ranks of poor countries to rich.

The incongruity is that in the process of making its economy more market-oriented — albeit market-oriented with Chinese characteristics — it is building up its state-owned enterprises (SOE) to be more innovative and business-like in a way that distorts markets and entrenches vested interests that, in turn, increase the resistance to reform. It also crowds out the entrepreneurs and small and medium sized companies where growth-generating innovation flourishes.

Those need a business environment that is framed by good institutions and a regulatory and governance regime that may not be to the taste of big business in the form of the SOEs, who see their (patriotic) role as competing with other multinationals not fending off pesky upstarts at home. The third-quarter figures underline how much of a hard slog putting that in place that is proving to be.

Monday’s publication will push the World Bank’s report, China in 2030, to center stage in the emerging, if ultimately pointless debate about whether China’s state-directed capitalism is better than the U.S.’s free-market capitalism. The later has undeniably damaged its case with the self-inflicted injuries that caused the 2008 global financial crisis. The revival of the 1930’s blend of banker and gangster, bankster, is timely and apt, in that regard, just as are the Occupy protests that have sprung up around the free-market world. But, in their rush to throw out some fetid bathwater, capitalism’s critics risk tossing out the baby, too. Nor is the Chinese model a proven substitute. For all that it has seen China though the post-2008 crisis period with higher growth rates than the Western Economies, the long-term costs have yet to fall due.

The World Bank report reportedly argues that the dirigiste model that has seen China through a remarkable three decades of economic development has run its course. We don’t yet know the details of the Bank’s arguments, but this Bystander has long argued the necessity of structural change if China is to move up the development ladder. The heart of the real test for China’s state capitalism is not whether it is better than banksterism. It is, can it vault the country from the ranks of poor countries to rich. To do so, it will need to clear the middle-income trap or the economic Great Wall–choose your metaphor–something no developing country has done without institutional change. This Bystander thought it timely to republish China’s $10,000-12,000 Question, first published in January last year, examining whether China can defy history:

Whether political reform is an inevitable consequence of China’s economic reform has been a longstanding question. Ilian Mihov, an economics professor at INSEAD,  the Paris-based business school, flips the question on its head. He asks whether the country’s ability to develop its economy rapidly can continue without institutional reforms regarding the rule of law, governance and accountability.

In a recently published report of a session on China at an INSEAD symposium in Singapore last November, Mihov said China needs “deep structural reforms”. Command economies can only sustain fast growth with weak institutions for so long. The tipping point comes when per capita income reaches $10,000-12,000 a year, the point at which developing economies tend to stop developing without institutional change (see chart below)*.

“There is not a single country that has good quality institutions and is poor,” Mihov said in Singapore. “The gap between rich and poor is driven by poor productivity that is linked to poor quality institutions and poor business environment.”  As evidence he offers the contrasting experiences of Singapore and Venezuela. Even more dramatically, consider the economies of the old Soviet bloc, which collapsed as per capita incomes hit and then got stuck at the $12,000 a year level (adjusted for current prices).

China’s annual per capital income is $4,000. At current growth rates that gives it less than a decade before it starts bearing down in earnest on that tipping point or The Great Wall as Mihov inevitably dubs it. 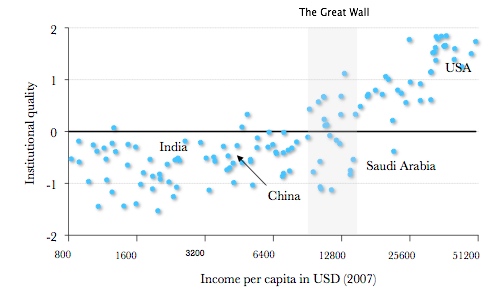 What makes for the aforesaid poor quality institutions and a poor business environment includes political instability, government inefficiency and the prevalence of corruption. Those are factors within government’s control. There has been progress, albeit piecemeal, as with, for example, the current anti-corruption campaign and the improving quality of China’s civil, if not criminal courts. There are other reasons than planning for long-term economic development for those changes, but the $10,000-12,000 question is whether that progress continues at a sufficient pace to carry the country through the transformation to a new peak of development. Or will it be left stuck on the plateau of stagnation?

The growing economic and political clout of state-owned enterprises is another possible impediment to progress. Like Japan before it, China has grown fast by replicating and improving on what advanced economies have already done and producing and selling the results much more cheaply. Yet, as Japan found out, there comes a point where innovation has to replace imitation if growth is to be sustained.

China’s state-owned national champions and aspiring multinationals are ambitious, adaptive and fast learners (as were Japan’s). They are developing R&D and product development capabilities but they remain reliant on access to low-cost capital from the state, have rudimentary organizational and financial management skills by the standards of multinationals and have yet to acquire two of the most essential traits of a globalized multinational, managing diversity and allowing the intrapreneurship in which innovation can flourish (traits that few Japanese multinationals were able to acquire).

Beijing is throwing a wall of money and of engineers and scientists at making its national champions more innovative (dealing with diversity isn’t even on the radar). Yet in the process of building up the SOEs it is distorting markets and entrenching vested interests that increase the resistance to reform. It also crowds out small and medium sized companies where growth-generating innovation truly flourishes. Those need a particular business environment which is possible only with good institutions and a regulatory and governance regime that may not be to the taste of big business in the form of the SOEs, who see their (patriotic) role to be competing with other multinationals not fending off pesky upstarts at home.

That sets up a dilemma for the leadership. If the Party’s legitimacy to monopolistic rule depends on continuing to deliver the economic growth that keeps its citizens getting richer and Mihov is right that the country’s rapid economic growth cannot continue beyond a certain point without institutional reform, then managing the role of government in the economy and overcoming state-owned vested interests — in other words reforming itself — becomes China’s policy planners most important concern.

*There is a 2009 research paper on the $10,000-12,000 barrier by Mihov and his colleague Antonio Fatas, The 4Is of Economic Growth, from which the chart above was abstracted. A summary focusing on China, Another Challenge To China’s Growth, was published in the Harvard Business Review of March 2009.