THE IMF’S LATEST Article 4 consultations report on China’s economy retraces some well-trodden ground. While edging up its projections for China’s growth projections, the Fund again underlines the growing risk from debt in the medium term.

Arguably this is the greatest macroeconomic risk that China faces and which the Fund says needs to be addressed now if sustainable growth is to be sustained. It summarises that risk in a supplementary note to the main report thus:

International experience would suggest that China’s credit growth is on a dangerous trajectory with increasing risks of disruptive adjustment and/or a marked growth slowdown.

Managing the debt issue is inseparable from rebalancing the economy, away from infrastructure investment and export-led growth to domestic consumption.

Progress in rebalancing, the Fund acknowledges, is being made, particularly in reducing industrial overcapacity. Borrowing by local governments is being made more transparent, and regulators have started to address financial sector risks.

The Fund, though, calls, as it has repeatedly done in the past, for the pace of reforms to accelerate, taking advantage of the relatively robust growth the economy is now enjoying.

Its check list of five action points will be familiar:

The fund particularly recommends accelerating the reform of state owned enterprises by moving social functions away from them and opening their protected sectors to more private and foreign competition.

There will be a cost to that which will strain the financial system. Bankruptcies will rise with the elimination of blanket state guarantees and lenders that have made uncreditworthy loans will get into trouble. The political concern is that strain on the financial system turns into social stress. 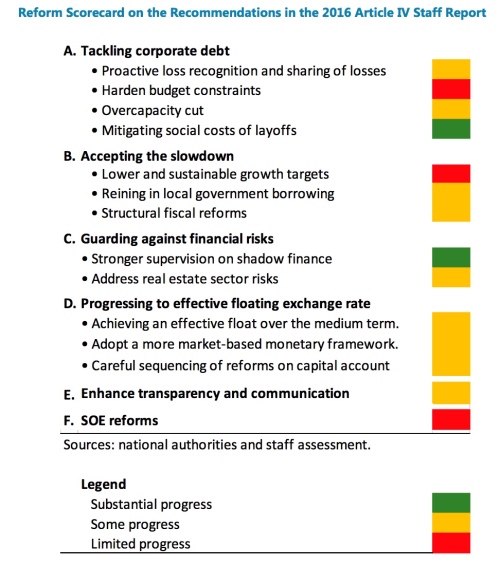 As this Bystander has noted before, policymakers have been steadily if cautiously managing down the GDP growth rate for several years, mostly by reducing too high investment and too rapid credit growth. They have been less active in opening up replacement sources of growth, notably by opening up to the private sector.

The fund also lays great importance on the need to liberate private savings for consumption by increasing public spending on health, pensions and education, three areas in which its spending is well below the OECD average, and by increasing social transfers to the poor, who are disproportionately greater savers than the poor in other countries,

Again as this Bystander and many others have noted before, the longer China delays tackling the structural underpinning of its debt load, the longer resolving them will take and the greater the risk of not doing so becomes.

This is an opportune moment from an economic point of view to do so. Growth in the first half of the year was more robust than expected with both the global economy and financial conditions being benign. Domestically, the effects of cutting industrial capacity are starting to work through, bolstering profits and areas of the private sector where state-owned enterprises are largely absent, such as e-commerce are showing exemplary dynamism.

Also, balance-of-payments and exchange-rate management have been adept while some old-school fiscal stimulus six to nine months ago has also kicked in.

Markus Rodlauer, deputy director of the IMF’s Asia and Pacific Department, put it this way:

The situation at this point right now…should be used as an opportunity…to bear down and to buckle down and continue with this financial sector adjustment, which is really the Achilles’ heel now of the economy.

Once the 19th Party Congress due to be held in October or November is out of the way, and assuming it has not changed politics appreciably, that may happen more visibly.