Too Innovative To Be True 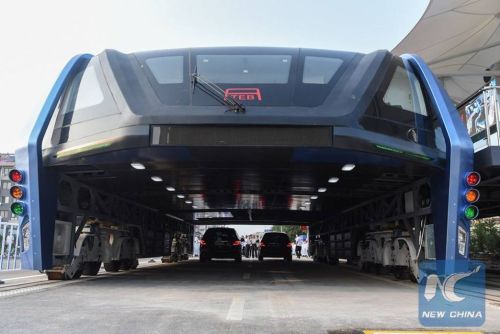 THE GIANT TRAFFIC-STRADDLING bus that caught this Bystander’s somewhat skeptical eye last year (see above) has gone the way of many an idea that was too innovative for its own good. Nowhere.

Technical and financial shortcomings seem to have done for it, according to press reports. Latest reports say the test track is being dismantled.

Last year, shortly after the (very) short test run of a prototype Transit Elevated Bus (TEB) in Qinhuangdao, the Beijing News reported that the main investment promotor for it was Huaying Kailai, an asset management company blacklisted in 2015 for conducting illegal finance activities. The Global Times said the firm, part of the Huaying Land Group, also ran a peer-to-peer financing scheme that promised high returns but risked running out of cash.

Claims of cooperation agreements between the bus’s maker, TEB Technology Development, and municipal governments appear to have been as spurious as purported orders from three countries in Latin America.

Update: Police have arrested 32 people in connection with the failure of the TEB, including the CEO of TEB and founder of Huaying Kailai Asset Management, Bai Zhiming, and 31 Huaying Kailai employees.