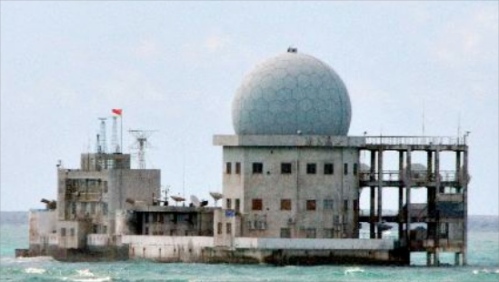 For those who asked about the radar station in the background of the picture in our earlier post about a large Chinese fishing fleet arriving at the Zhubi reef in the Nansha Islands (the Subi Reef in the Spratly Islands to much of the rest of the world), we offer the close-up photograph above. Beijing says the radar station is intended to be for weather monitoring. The Philippines, which is also building four radar stations in its own waters of the South China Sea that will use communications and surveillance equipment supplied by the U.S., fears China’s station could easily be used for military purposes, too.